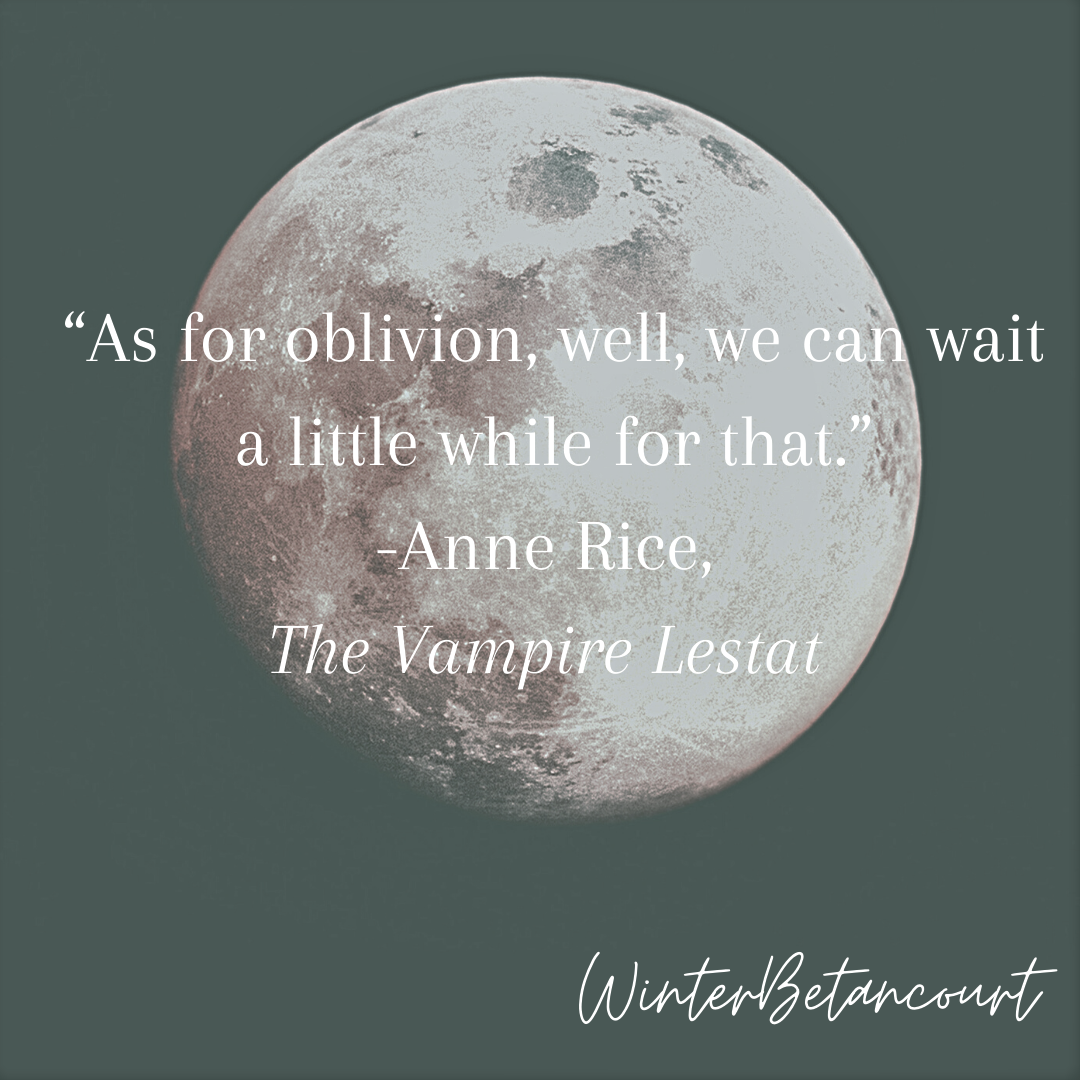 “Listen to them, the children of the night. What music they make!”

Who’s your favorite literary vampire of them all?

I asked myself that question this weekend as I finished reading The Vampyre by John William Polidori, featuring the diabolical Lord Ruthven (spoiler, he’s definitely not my favorite vampire).

It’s a popular question, because there are so many works dealing with the topic of vampires. Whether they be non-fiction books examining the myth of vampires in cultures across the world, to fiction books featuring a vampire as the protagonist or the antagonist or a supporting character, you don’t have to look far to find a book featuring these famous creatures of the night (especially around Halloween!)

Why do vampires fascinate us so much? Is it because they live forever, eternally the age at which they were bitten? Or because they’re usually depicted as very powerful, rich, beautiful and deadly? These are traits that humans have coveted throughout history, and it seems like in many books, vampires have them all. Sure, they drink blood, but wow they have fascinating lives. And if you get too close to one, sure, you might get bitten, but you also might have a thrilling adventure hanging out with a lovely, powerful, immortal being who is seemingly obsessed with you (Twilight).

In medieval times vampires were creatures of horror. People believed that they were real, and took deadly serious precautions to ensure their dead never came back once they were buried. A literary vampire that evokes this sense of horror for me are the vampires in Stephen King’s Salem’s Lot. Closer to demons, there is nothing appealing at all about these creatures. They definitely don’t want to be your friend, or bring you to live in their amazing castle. They are manifestations of human evil, wretched creatures symbolic of the flawed humans they were before they became vampires.

If vampires were real, I believe that they would be complex beings, not easy to label and classify. Just like humans are diverse and complicated, vampires would similarly show differences in personality, methods and let’s say, appetite. Living forever could be considered a gift, it could also be a horrible curse–watching generations of family and friends die while you stay alive eternally. Having to kill to live, to hunt for every single meal, never able to rest. Accumulating knowledge, with all the time in the world to learn, but carrying that knowledge for eternity–carrying the suffering of humanity on forever. I’ve always liked how Anne Rice’s Interview with the Vampire shows Lestat and Louis, with all of the romantic traits we associate with vampires today but also conflicted, flawed, lonely and self-destructive.

If I had to pick a favorite though, there can only be one choice. For me, it will always be Bram Stoker’s Dracula, an oldie but a goodie. I love the brides of Dracula, the old castle, the diabolical vampire shipping himself across the sea to England in search of prey. The character of Dracula is believed to have been inspired by Vlad III, also known as Vlad the Impaler, a Prince of Wallachia, in what is now modern day Romania. I read this novel again and again when I was living in Germany. Inspired by the book I packed my bags and went with some friends to Romania, to visit Transylvania. Although information is limited on where Vlad actually lived, we visited  Sighișoara, the home where Vlad was reportedly born. We also visited Bran’s Castle, a castle where Vlad stayed. It was a fascinating way to enjoy the book in a new way. The beautiful architecture, the misty mountains and the possible connection to this literary inspiration made it easy to imagine the book coming to life. I love reading a good book in an atmospheric place, it makes it that much more fun!

Who is your favorite literary vampire? There are so many to choose from, and it seems like everyone I ask has a different opinion! I hope that whatever you’re reading this weekend/week that you’re enjoying it very much. Have a great rest of the weekend and thank you so much for reading!